As a traveller, there are those places you know will stay with you forever. You may get back to them if you're lucky, or you may not, but you'll be forever grateful that you made the effort. One such place for me was Tsodilo Hills in Botswana, a mythical place in the far-eastern corner of that splendid country.


Tsodilo Hills is a UNESCO World Heritage Site for the prolific rock art to be found there, the work of the Bushmen (or San) for whom this place has long held spiritual significance. There are apparently more than 2750 paintings at 200 separate sites on these hills and traces of human habitation go back some 100 000 years.

Although Laurens Van der Post has fallen into disrepute posthumously for a whole bunch of reasons, he certainly could evoke the spirit of place. In his book The Lost World of the Kalahari he describes in some detail his visit to these hills and a series of misfortunes that befell his party because they disrespected the ancestors (by shooting a warthog and steenbok on their approach). By way of an apology, Van der Post buried a letter asking for forgiveness below a sheer rock face now known as the Van der Post Panel, before heading back to Maun.

On the first night camped beneath the hills, Van der Post took himself for a short walk but soon got spooked. "The silent rock faces made me feel acutely uncomfortable," he wrote. "In that red afterglow of an immense Kalahari sunset they (the hills) had a strange, living personality as if their life had been only temporarily suspended in the sleep of motion that we call 'matter', and they might wake up, at any moment step down, and walk the desert on some cataclysmic occasion of their own."

On our visit, we picked the Rhino Walk (a circular walk around the Female Hill) because we were a bit pressed for time, having decided to make only a day trip from Guma Lagoon Fishing Camp where we were staying. There are longer walks, but then you'd need to camp nearby in the community camp for a few days to tackle these.

There's a reasonable 50km gravel road to the hills, off the main (tar) road that runs up the panhandle from Maun to Shakawe. Because of their World Heritage Site status, you have to sign in at the entrance and pay the relevant fees before you can proceed to the visitor's centre. You may only walk with a guide who will show you the most famous art. In the old days, you could camp just beneath the hills (as did author Laurens van der Post) but now visitors are restricted to a community campsite, some distance away. Perhaps, given the reputation of these hills, that's a good thing! 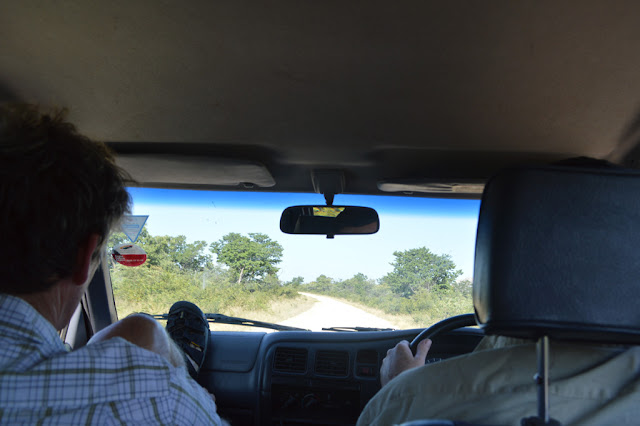