If you look at a map of Botswana, smack in the centre is a green wedge around which every road in the country has to circumnavigate. This is the Central Kalahari Game Reserve (CKGR), the size of a small European country. If you plan your trip carefully, it's not quite as daunting as it looks. For the purposes of this trip around Easter 2014, we fixed up an old, red Toyota Hilux bakkie which we called Rooikat (Afrikaans for "red cat" or caracal). Some bits of the bakkie did rattle off during the trip but it got me to a place I had only ever dreamed of going before.

We chose to centre our stay around an area called Deception Valley, made famous by American biologists Mark and Delia Owens who wrote a book called Cry of the Kalahari. When they lived here, there were precious few visitors, but the reality is that you can get to one of these campsites within a comfortable day's drive from Maun. 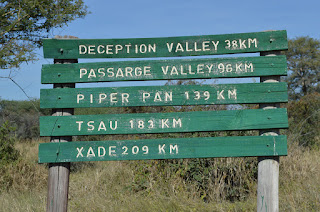 The CKGR is not to be confused with the Kgalagadi Transfrontier Park that straddles the border with South Africa to the southwest. It's deep Kalahari of a different kind with a distinctly savannah feel in the northeast corner. This is where we based ourselves for the better part of a week. Our entry point was Matswere gate which is a 46km drive from a village called Rakops on dirt. From the gate, it's roughly another 40km to the first of the campsites.

Although there had been some rain when we visited, these muddy stretches (below) were easily negotiated. (Apparently the staff at Matswere gate will come and pull you out of difficulty if you're within a few hours' drive of the gate.)

For the rest, the roads were sandy but perfectly manageable with deflated tyres. Apparently, deeper into the park you will encounter deep sand and so you should provide for extra fuel should you choose to venture further. (We were never more than around 60km from the gate.)

We stayed at four different campsites: two in the Deception Valley area, one at nearby Kori Pan and another at Sunday Pan around 20km deeper in. There is a lodge somewhere close to Deception Valley which means you may occasionally run into lodge vehicles on a game drive, but your contact with other people is minimal. The fossilised riverbed of Deception Valley makes for sweeping vistas with open grassland and idyllic conditions for antelope like these gemsbok. There are predators too, but we only heard them.


The only facilities at the campsites are a bucket shower (remember to bring all your own washing and drinking water). The loos are long drops, albeit with proper toilet seats. Take a sturdy tent because there are no fences here and you will feel more secure when the lions start to roar after dark. Because we were visiting over Easter, bookings were in short supply and so we had to move a bit more frequently than we would have liked.

We stayed at CKDEC06, CKDEC02, CKKOR02 and CKSUN02 (pictured above). The first three sites we booked directly with the Botswana wildlife service, but at Sunday Pan we had to book through a private operator called Big Foot which charged substantially more due to the popularity of the location. The 'services' were identical. CKDEC06 and 02 were in thickish bush while CKKOR02 had a more open aspect where we had a marvelous sighting of tagged vultures flying overhead. CKSUN02 was also surrounded by dense bush but had great birdlife and easily accessible game drives close by. Take a compressor so that you can deflate your tyres for the sand and reinflate them when you rejoin the tar. During the planning stages we got invaluable advice from the SA 4x4 Community Forum.