Road-tripping in Scandinavia 2: What to eat and drink

One of the joys of international travel is that every day outings, like grocery shopping in the local supermarket, are entertaining simply because of the novelty factor. When my husband and I embarked on our 3 000km roundtrip from Stockholm to the Lofoten Islands and back, we decided self-catering would save us a heap of money, and it did.


We were advised that Sweden was cheaper than Norway (by about at least a third) so we stocked up on as many groceries as we could before we crossed the border. We kept it simple: muesli for breakfast; rolls with egg-and-tomato spread or cheese and crackers for lunch, and a simple cooked meal at night.

An essential item was a flask filled with hot water so that we could stop and make ourselves a cup of coffee or hot chocolate at scenic spots while snacking on our packed lunch. The picnic blanket we'd optimistically brought was never used because it was just too cold even in mid-June, but we did enjoy a few beautiful views, like this waterfall called Laksforsen (or salmon falls) in northern Norway.

Eating out isn't something you really do in Norway, unless money is absolutely no object, but at Klostergården on the island of Trauta near Trondheim, there were no self-catering facilities and we had decided to treat ourselves. Here, we nursed a glass of delicious craft beer (one glass only at 80 NOK each), enjoyed a free serving of nettle and seagull soup before the main course of gammon and beef stew, respectively. Good hearty fare. Seagull eggs are apparently collected for only three weeks in the year, and once a bird has laid three eggs, she will start to sit on them and so she'll be left in peace. The egg tasted like, well, an egg, albeit a fresh one.


The only other memorable meal out was perforce in a town called Bodø where we had several hours to kill before we caught the three-hour ferry across to Moskenes on the Lofoten Islands. It had been a long and grumpy day, crossing the Arctic Circle and driving on the 'wrong' side of the road on narrow roads for hours on end. Every road-trip has one of those and this now goes down in family lore as my 'Arctic moment'. Our mood lifted, however, when we found this Lebanese takeaway with some plastic tables and chairs, where the owner was only too happy to cook up a storm. We fell on the freshly baked pita bread, homemade humus and this assortment of odds and ends, like hungry Arctic wolves.


I was hoping to eat more fish in Norway, but aside from the ubiquitous salmon, it wasn't always that easy to find what I was hoping for (and perhaps we are a little spoilt coming from the southern tip of Africa). A hop and a skip from where we stayed in at Sakrisøy there was a little fish deli that stocked some interesting items but I'm afraid I just couldn't bring myself to sample the smoked whale meat. Apparently, this is minke whale that is sustainably hunted but I'm too old to eat things I don't want to and I imagine it's an acquired taste. I read somewhere that even though Norway continues to hunt whales, there is a decline in demand among the country's own population.


They also sold seagull eggs (at a price). No wonder these poor birds would mob us at every turn when we were out walking. 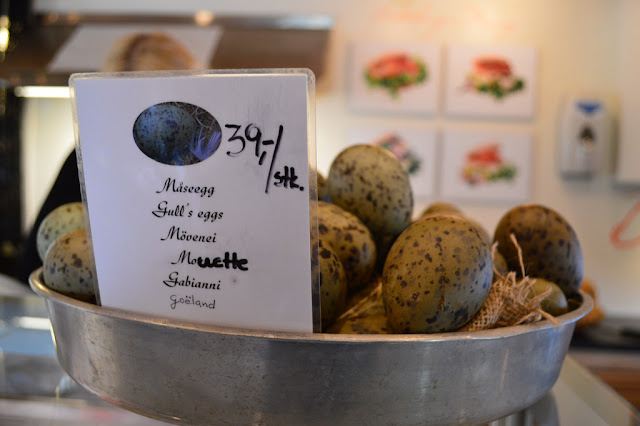 Another Lofoten speciality is the salted cod which hangs in the breeze on racks to dry. While we were there, the cod was still strung up and there was a distinctly fishy pong in the air. The cod come to spawn in the waters here early in the year, and most of it is destined for Italy and Portugal, where it is highly sought after.


I have no photograph to illustrate this last foodie mention, but Trondheim had a fabulous farmer's market in its main square on the Saturday we were there. For dinner, I tucked into a 'craft' sausage on a home-made roll, which 'only' cost 80 NOK. But, hey, it was almost time to head home!

And, finally, a note for the thirsty...

Alcohol, of course, is an entirely different story and, outside the odd spoil like the craft beer above, one is best advised to carry with you that duty-free bottle of whisky you picked up at the airport for your evening tipple. For the most part, it is expensive and only sold in state-controlled bottle stores. You can buy beer in supermarkets (low alcohol in Sweden and full-strength in Norway).
Posted by redwingstarling at 19:34