Off the beaten track: A detour through the Upper Karoo

On our return journey from the lovely, newly discovered Mokala National Park near Kimberley, my mother, her friend and I decided to take the long way home, and head towards the west coast (rather than via Beaufort West) into the vastness of the Upper Karoo where the roads are straight as arrows and there's little to break the horizon. This meant we had to backtrack to Britstown before taking a right into the greatest of open spaces South Africa has to offer.

From Britstown to Vosburg was a good 65km, and although the little town is off the main road, we turned off to take a look. The sign at the entrance invites visitors to come and enjoy the shade trees, and they are indeed impressive: large beefwoods line little gravel roads with typical Karoo homesteads, a fraction lost in time. 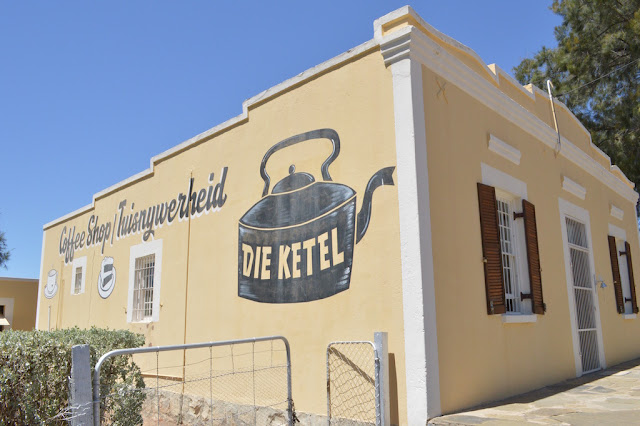 Here we found Die Ketel, a tuisbedryf (home industry shop), staffed in rotation by the women who make the goodies, such as rusks and cakes and jam. After a quick spin around the town, we were back on the road, tackling the 80km to Carnarvon (it's tar although the map shows gravel).

Carnarvon is newly famous because it's close to where the SKA, the world's largest radio telescope, is being built. But we did not linger as our destination for the night was a place called Stuurmansfontein where we planned to sleep in an historic corbelled house built out of stone by trekboere (pioneer farmers).

About 25km out of Carnarvon, we turned onto a gravel road that would take us yet another 25km, past a martial eagle hanging in the sky and a dam surprisingly full of flamingos, to a farm house lush with garden roses. We were met by Charmaine Botha, her hands red from pickling beetroot, who told us the dam had recently been repaired and the flamingos had only arrived a fortnight earlier, before directing us a further 5km down a two-spoor track to the old house.

I hadn't read the small print, and so discovered there was no running water indoors when my mother was trying to make tea (there is an outside bathroom and a tap). So we had a real taste of pioneer life. Nevertheless, Charmaine's hand was evident in the fresh flowers, lovely beds and linen and other touches in the house. Once we figured out how to make the tea, and had our outdoor showers, we could enjoy the absolute isolation and that deep silence you only get in places like this. We were assured there was nobody else around. Except, at dinner I could hear what sounded like voices murmuring in the kitchen, rather like a radio station playing just out of earshot. Perhaps it was the ghosts or just the wind in the chimney. We'd cooked our delicious Karoo chops over a fire outside in a skerm (a wind shelter made by stacking bushes in a semi circle) while watching the swifts hawking overhead as they caught their last insects before turning in for the night.

The next morning, I took myself for a walk up the kloof behind the house, where a stream comes down in a trickle. As I walked deeper into the kloof, I heard the piercing jackal-like wail of a buzzard, warning me off. It was a pair of jackal buzzards, and I'm presuming they had a nest, so I backtracked without wishing to disturb them further.

On the way back on the main road, we encountered a group of shepherds herding sheep.

And then on and on we drove past more corbelled houses, 132km to Williston where we'd promised ourselves coffee at the Williston Mall before pushing on. It's not really a mall at all but a place that houses an eclectic mishmash of things to buy and eat, and where I discovered the delicious Karoo Swiss Langbaken cheese (and have since found an outlet or two in Cape Town) made from a herd of only 12 jersey cows.

From here, 115km to Calvinia past the jagged edges of the Hantam mountains to Nieuwoudtville which lies on the edge of an escarpment catching the last of the winter rain. We spent the night on a farm called Papkuilsfontein, about 25km out of town, where we slept in another historic cottage and I took a walk to the nearby swimming dam which offered up a lovely sunset view. From here on in we only had the downhill home run to go.